Scary Movies – Nothing to Fear But Watching Alone

Which horror movies scared you the most? I was weaned on the horror flicks of the early 1960s (many of which were actually released in the late ’50s). By the time I was allowed to see them, it was after the Bela Lugosi/Lon Chaney era. In fact, the classic, yet somewhat more contemporary Christopher Lee played the Count in the first horror movie I ever saw -“Horror of Dracula.” Like a first kiss, it has to be in the top five fave – just because it was a “first.” Besides, after seeing it, I stayed awake all night, thinking I felt my teeth growing. My big brother and I loved spending an afternoon at the movies – especially the scary ones. Afternoon seemed the ideal time to see a scary movie. You think if you see it early enough in the day, you will recover by bedtime. Wrong! Those images linger in the subconscious, just waiting for your mom to turn out the lights. Then, it’s let the nightmares begin.

Because of the Cold War and universal fear of the atomic bomb, it was also the era of corny sci-fi flicks. But, the martians and mutants, such as Reptilicus, the giant ants of Them, The Fog, and super-monsters such as King Kong and Godzilla just didn’t frighten the bejeebers out of me the way the Edgar Alan Poe classics and horror films with Vincent Price and Ray Milland did. So, my Top 5 list includes Premature Burial, after which my brother would never again eat macaroni (something to do with a maggot scene). Both of us, to this day, can whistle the “grave-digger’s song.” We were also traumatized by a more psychological horror film, Mr. Sardonicus, whose face became horribly disfigured from robbing his father’s grave – go figure… Produced by William Castle, known for gimmicks, the film ended with an audience poll, where we could give thumbs up or down to indicate a vote of mercy or punishment for Sardonicus.
Castle also produced The Tingler, starring Vincent Price. The gimmick for that film was to equip some movie seats with “Percepto,” a vibrating device. I am pretty sure I sat in one of those seats, and it actually felt like a very mild electric shock. Part of the stratagem included a point in the movie where the audience is told the Tingler was loose in the theater, to “SCREAM – scream for your lives!” Even without the device, watching The Tingler years later, it is still out-loud scream-scary.
We saw them all – House of Usher, Pit and the Pendulum, House of Wax, The Fly, Village of the Damned, all those involving creatures from outer space, and of course, the Hitchcock classics such as Psycho and The Birds. Yet, none disturbed me as much as the aforementioned.

Fast-forwarding from the ’60s to 1979 – a movie that never fails to creep me out – Stephen King’s Salem’s Lot. Despite good guy/protagonist David Soul’s heroism, that one will give you nightmares while you’re awake. Even the 2004 remake with Rob Lowe is spine-tingling scary, and I am characteristically anti-remake.

Nightmares aside, it was great fun seeing scary movies with my big brother. Anticipating a gruesome scene, he always made me cover my eyes. At the time, I thought he was protecting me. In retrospect, I realize the possibility he might have had me cover my eyes so I wouldn’t see him covering his. Scary movies are fun – but, never, ever watch alone… 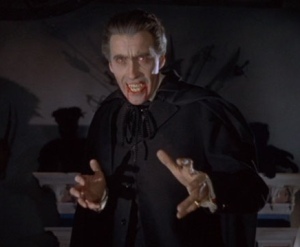 Now, for the proverbial “call to action:”
If you liked this piece, please click “Like,” leave a comment, “Follow” my blog, better yet, share the link with friends, family, or colleagues you think would enjoy it. It’s the only way a writer can gather an audience.
Thanks very much!
Nancy

2 Responses to Scary Movies – Nothing to Fear But Watching Alone