Mother’s Day weekend, I had the pleasure of visiting with my son and his gf (that’s hip for “girlfriend” – how cool am I!).

Somehow, we got on the subject of Bruce Willis’ fame. I immediately referenced Moonlighting.  Despite it’s airing in the mid-late 1980s, my son actually (albeit vaguely, because he was very young) remembered it – or was, at least, familiar with the title.
Because it was completely foreign to his girlfriend, I began to explain how the show was initially intended as a Cybill Shepherd showcase until Willis’ character David Addison quickly eclipsed the female lead. The blank look on gf’s face was my clue to backtrack and ask if she knew who Cybill Shepherd is. With some hesitation, she said when she was younger, her parents often called her “Sybil.”

I explained how “Sybil” was a woman with multiple personality disorder, portrayed by Sally Field in a movie of the same name. (As an aside, I then weighed my feelings about my son dating a girl whose parents called her Sybil. But, hey – I called my own little girl “the princess and the pea.” They all have their issues.)

Resuming my lecture, I explained how Cybill Shepherd was a former model, Breck girl, actress. No look of recognition crossed their faces. The Last Picture Show –  still nothing.

So, I blew that off, and proceeded to elaborate on how great David Addison was (in what we have come to know as typical Bruce Willis charisma), specifically describing him in my favorite episodes, and how Moonlighting catapulted his career.

Next up – I had recommended they record In the Heat of the Night, because it’s a great movie and history lesson, as well.

You can see where this is going…   Who is Sidney Poitier?

My first reference was To Sir, With Love.  My son knew that, because I had made my kids watch certain classic movies, simply to ensure they would be culturally literate.

Again, the gf drew a blank.

Hmm… How can I describe how awesome Sidney Poitier is to someone who has never seen (or heard of) To Sir, With Love, Guess Who’s Coming to Dinner, Lilies of the Field, or any of his vast body of work…

“Sidney Poitier was the Denzel Washington of the previous generation.” 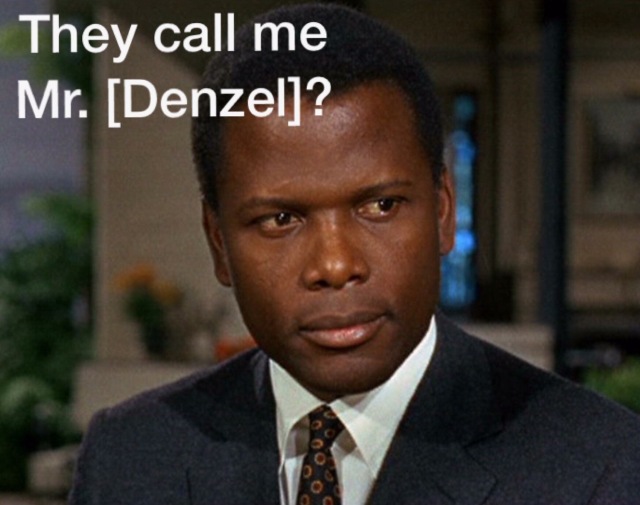 Now, for the requisite call to action:

If you liked this piece, please click “Like,” leave a comment, “Follow” my blog, – better yet, share the link with friends, family, or colleagues you think would enjoy it. It’s the only way a writer can gather an audience. Thanks very much!